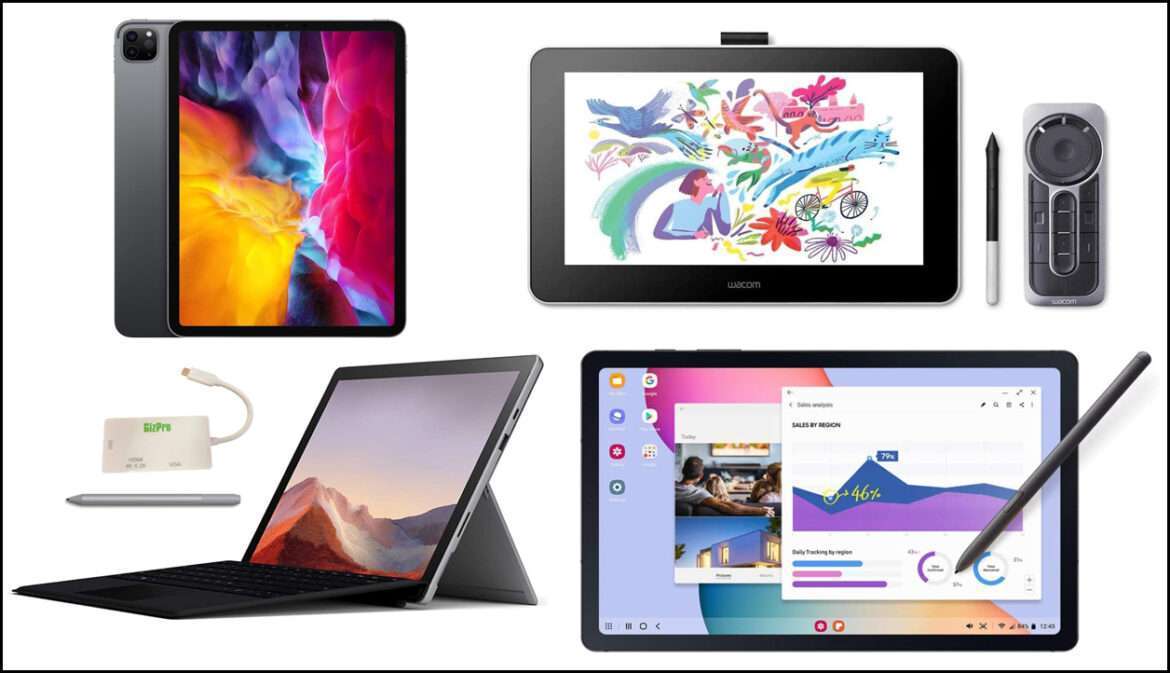 You can do the regular editing task by using a PC or mac. But if it is a matter of travel anywhere, then for the emergency need, you can carry a tablet to avoid delaying the deadline of your project. We consider some essential points in choosing the best tablet for photoshop editings, such as speed, portability, compatibility, and user experience. Please select the best one for you from our top seven picks. Good wishes!

Things to consider when choosing the Best Tablet for Photoshop Editing

You will see many beautifully designed and thin look tablets on the market. It doesn’t mean that this is the best tablet for photoshop editing needs. There are a few things to consider, such as a fast processor, the size of the tablet screen, and its resolution.

You are planning to buy a tablet because you can use photoshop to edit your photos. For this, the most important thing is power possibility and then the color resolution of the screen, great storage, a few gigabytes of RAM, and the processor speed. Consider the tablet weighs and whether it’ll flexibly fit with your backpack or camera bag.

For Photoshop professionals, it is required to have a fast processor and a perfect resolution screen. Those facilities will help you to get the actual result of your photoshop editing’s, such as retouching, color correction or color adjustment, ghost mannequin effect, and designing.

The best tablets for Photoshop reviewed

Below we’ve reviewed the top ten best tablets for Photoshop editing. This article will help you to decide on the best tablet. Keep reading!

The Apple iPad Pro 11 inch is the best Apple tablet for photoshop professionals. Its fast processor and incredible edge-to-edge liquid retina display prove that the Apple iPad Pro 11 inch is one of the most powerful tablets. The keyboards of this product will give you a great typing experience. Magnetically connect the keyboard to the iPad without plugging or pairing. You can carry it safely in your laptop bag or your backpack in case you travel.

It has a built-in Photoshop app, which is almost similar to the desktop version of Photoshop. The Apple pencil will make your task more manageable, and it’s very comfortable to use more than the mouse. It’s an excellent invention for photoshop professionals. This portable table will be perfect enough to travel anywhere because it is lightweight, and its battery life is incredible.

Using the Apple iPad Pro 11 and photoshop, you will be more flexible in managing and exporting high-quality files. Like. PSD, TIF, PNG, etc.

The Microsoft Surface Pro 7 is a detachable 2-in-1 laptop/tablet launched in 2019. While not reinventing the Windows tablet formula, it lasted the tides of time. Adding a USB Type-C port certainly stays up-to-date with recent laptops.

Even after so many alternations of Surface Pro, the design has stayed the same across multiple versions. They are going as far as the models of the previous ones, looking pretty similar except for the inclusion of the USB-Type C.

Loaded with Intel’s leading CPU chips, it can run Photoshop without hindrance. With that being said, as it is a 2-in-1 detachable laptop, you can use the touchscreen interface to make further your photos look sleeker without any drawbacks. The ability to run Adobe Photoshop on it, as it is a windows system, is quite convenient if you are an artist who is always on the go.

Especially if you are a graphic designer, the Surface Pro 7 laptop is for you; always on the fly, you can design and integrate logos and art with precision. It is quite the price for a tablet of this magnitude.

Chromebooks, unlike other laptops, are different from what they were perceived to be. Not being limited to them anymore, it is one of the best in the market to what you can accomplish with it. Deriving its design from the recent MacBook, being most similar to the MacBook Air; it has one of the sleekest designs without taking it too far. One of its biggest pros is the ability to access Android apps through the Google Play Store.

With its resolution going up to 1366 x 768, its touch-enabled Display is a sight to look at. Along with its compressed keyboard and smooth trackpad, it is fantastic to be used and meddled with. For its ports, it comes with one USB 2.0 port and a USB 3.0 port, with USB Type-C being a significant loss to the system’s ability to transfer files. A standard HDMI port makes for a fantastic display choice with a monitor. It also has traditional ports, such as a headphone jack and an SD card slot.

Running Photoshop on it is a treat. Seeing such a small device run such eccentric software with its capabilities is impressive. Much like the Microsoft Surface Pro 7, it is a compatible touch screen which makes working with it much more accessible, along with making your projects look much cleaner.

Microsoft upped its game with the Microsoft Surface Go 2 in the tablet PC department, going as far as competing with Apple’s iPad. Especially with its mid-range price range, it stands as one of our top recommendations for the best tablets for photoshop or in general.

Its better battery life, more prominent, more colorful Display, and sleeker look are among the best products Microsoft has to offer in years. It is undoubtedly one of the more versatile tablets/laptops in the market, certainly more than any traditional laptop.

The Microsoft Surface Go 2 is one of the best for fulfilling a photographer’s or editor’s needs on a computer. It is a well-constructed device that doubles as a tablet while being a laptop. Due to its lightweight design, a worker can take it anywhere on the go and work without any problem. Professional photoshop editors who work all day on a desktop and lay back with a tablet can replace both devices with this one, as it acts as both with the right accessories.

After competing with Apple for years to settle the debate about the better company to produce intelligent handheld devices, it has never come this close to establishing itself as a competitor of this magnitude as it has in the tablet department with the Samsung Galaxy Tab S6 Lite. From its screen size to its price, along with features that brand it as one of the best tablets for photoshop in the 21st century.

The Samsung Galaxy Tab S6 Lite comes with the S Pen stylus to incorporate the editors or graphic designers of the modern era. It helps with not only the sensibility of the screen but also helps with designing detailed logos and takes editing to another level. With its USB Type-C port, faster charging is a given. With excellent battery life and a colorful display. Samsung takes this one in the bag. For Photoshop Users, this device will help on multiple levels. Its versatility and robust, clean device make it a recommendation for anyone in the field.

06. Wacom One Tablet for Photoshop

Wacom One Tablet for Photoshop Acting as a monitor display with a touch-enabled display is more of an added collection than an actual tablet. With a production of 1920 x 1080 pixel resolution, it comes with full HD (1080p) support. The bundled Wacom One Pen has 4,092 levels of pressure sensitivity and seemed reasonably responsive in my testing. The Wacom One Pen has 4092 levels of pressure sensitivity which is entirely complimentary for the price it comes at and can help any editor or designer with hand-drawn designs or artwork.

Processor: Wacom One is a pen display and does not have an in-built processor. It uses the pre-built processor of your computer or the device it is connected to

Wacom’s creative pen displays are a fantastic addition to anyone’s photo editing or designing arsenal. Wacom’s Cintiq 22 is the same. It allows artists of the craft to easily edit any picture with great detail or skill in any design artwork.

Processor: This is a pen display and does not have an in-built processor. It uses the pre-built processor of your computer or the device it is connected to.

You can also learn about How to Cut Out an Image in Photoshop. We wanted to make it easier by keeping the beginner in mind.

Q1. Are all of these tablets useful for photoshop users only?

Q3. Are all of these devices recommended even after the cons are listed?

Q4. What is a creative pen display?

Q5. What can be achieved with a creative pen display?

And there you have it! Seven of our recommended devices for any professional editor or designer. Hopefully, this list helps you narrow your list for any tablet you consider buying if you are looking for the best-priced DSLR cameras. 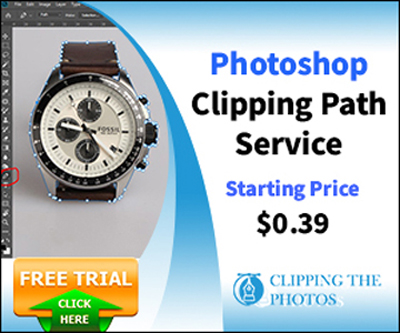 Clipping The Photos is a participant in the Amazon Services LLC Associates Program, an affiliate advertising program designed to provide a means for sites to earn advertising fees by advertising and linking to Amazon.com. *Amazon and the Amazon logo are trademarks of Amazon.com, Inc., or its affiliates.